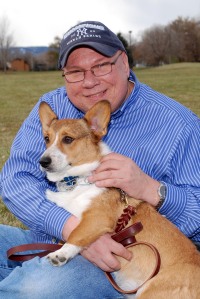 The Book Kahuna and his Corgi, Derek! 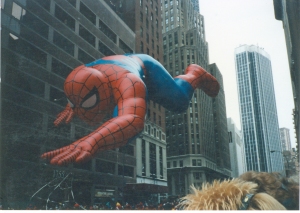 I wanted to take this opportunity to wish everyone a very Happy Thanksgiving.  Thanksgiving is one of my favorite holidays and always has been.  How can you beat a holiday where all you really have to do is eat Turkey and watch football?  It’s a fantastic day to have the ones you love around you and share home and hearth with friends you haven’t seen for a good portion of the year.

In 1989 I was about six years into my career in publishing.  I was working for a small company named Gordon and Breach where I was a production editor working on books and journals.  I started dating a woman named Sharon who I met through a coworker at an after work event.  Sharon was originally from Alabama, grew up in the Huntsville area and had come to New York seeking better job opportunities then she could find near and around her hometown.  Sharon was all about culture but also all about being frugal.  She would seek out the free nights at the various museums in Manhattan, and we spent countless hours at the Whitney, the MOMA, the Guggenheim and the Met.  Sharon liked to do things that were strictly New York-ish events.

In November 1989 Sharon and I decided that we would go to the Macy’s Thanksgiving Day Parade.  Now Sharon worked in midtown Manhattan at that time, while I was working in the Chelsea neighborhood, around 23rd Street between Fifth and Sixth Avenues.  Sharon’s office was on the parade route, and this was great information for us because we always had a place to go to use the restroom.  Those of you have never been to New York will not understand, but the search for a clean restroom is preeminent in your mind when you are at an event in the city (NYC).  As Thanksgiving got closer the weather report was not encouraging.  As a matter of fact the weather report was predicting a snowstorm.  Being the New Yorker that I am, I brushed it off as being a dusting at best.

Be Prepared:  As the Boy Scouts Are!

I honestly report that I did not prepare adequately for this event.  I did bring a heavy coat, gloves, and thermals, but I did not bring boots, instead electing to wear my sneakers.  The sneakers were a tragic flaw.  Since we were leaving directly from Sharon’s apartment, she was set with adequate clothes and layers to make sure that she stayed warm throughout the day.  We got up early on Thanksgiving morning, probably about 4:30 AM, and the first thing that I did was look out the window.  I’m sure my eyes must’ve grown wide as I saw roughly 4 to 6 inches of snow already on the ground with heavy snowfall still occurring.  Since this was my first time going to the parade I was ready whether my feet were comfortable or not.  We set off on the F subway train to take us up to midtown Manhattan.  Now Sharon worked in the Mony building, which has long since lost that moniker, but was immortalized in song by Tommy James and the Shondell’s with the original version of Mony, Mony.  Billy Idol covered this song and had another hit with it in the 1980s.

We got to the parade route early enough so that we were in the front row with no one ahead of us.  This parade is one of those events like New Years in New York that brings tourists from all over the world to watch.  We had German tourists Heidi and Helga, standing next to us as we watched the parade.  Sharon and I had a great time, but it was cold, frigid, freezing and snowy throughout the entire parade.  My feet have never been that cold.  If you want to experience cold, stand in a snowdrift for 4 hours wearing sneakers.  It doesn’t matter what kind of sneakers you want to wear: Air Jordans, Nikes, Addidas, or New Balance.  I guarantee your feet will be cold!

I just saw on the news tonight that they are filling up the balloons for the parade tomorrow but were worried about the wind gusts.  The best part about this report was the Spiderman balloon was being filled up in the background while they were reporting.  One of my pictures is the Spiderman balloon 24 years ago.  I’m glad to see that Spidee is still flying 24 years later!

My advice: If the weather is cold and icy, wear boots and not sneakers!

Happy Thanksgiving to all and please remember the homeless and unemployed this holiday season.

Also, remember our troops, all who serve and those on deployment away from their families this Thanksgiving!